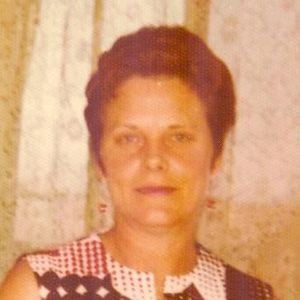 Merietta "Skeet" Gouker, peacefully passed away on Saturday, November 1, 2014. At her home in Castroville surrounded by family. She was 87.

A native of Oklahoma, Mrs. Gouker had previously lived in Watsonville for more than 50 years.

She loved to knit, crochet and bake pies. She also was an avid bingo player.
To a loving Wife, Mother and Grandmother you will always be in our hearts and will be greatly missed.

She is preceded in death by her husband of 52 years Frank "Shorty" Gouker , son Charles and grandson Brian Gouker.

Graveside services will be held on Friday, November 7, 2014 at 11:00 AM at Pajaro Valley Memorial Park, 127 Hecker Pass Road, Watsonville.

To send flowers to the family in memory of Merietta Gouker, please visit our flower store.