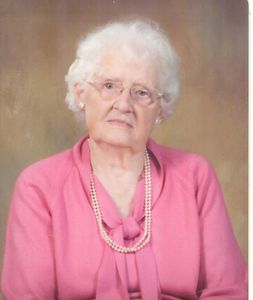 Muriel Wiser passed away peacefully on Friday, December 20, 2013, at the age of 93. She was born in Corvalis, Oregon on November 26, 1920, and spent most of her childhood in California in the towns of Madera and Los Altos. She graduated from San Jose State with a teaching degree. She was preceded in death by her husband of 64 years, Charles Wiser. Together they resided in Auburn, California before moving to Watsonville in 1963. She was an active member of First Baptist Church of Watsonville.

Graveside service will be held on Monday, December 30, 2013 at 11:00 AM at Oak Hill Memorial Park, 300 Curtner Ave., San Jose. A reception is being planned to take place at First Baptist Church, 101 Madison St., Watsonville, CA. In lieu of flowers, the family prefers gifts be sent to First Baptist Church, 101 Madison St., Watsonville.

To send flowers to the family in memory of Muriel Wiser, please visit our flower store.