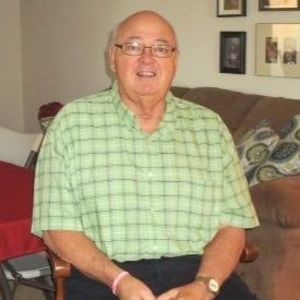 Nick was born in Watsonville on September 18, 1942 and peacefully passed away with his family by his side on June 5th.
Nick met the love of his life at Cabrillo Lanes Bowling Alley in 1964 and would marry her six months later. He and Pat spent 53 years together. They raised three children and spent many hours cheering on their grandchildren at various sporting events. Nick's children, grandchildren and great-grandchildren were his pride and joy.
While out and about Nick was recognized by numerous people as either the Star Market guy, the Dreyer's ice cream man, coach or Santa.
As an all-around sport enthusiast Nick spent over 40 years coaching youth basketball and baseball in the Watsonville area. He volunteered numerous hours and made an everlasting impact on hundreds of kids. Nick's larger than life laugh could be heard on the baseball field from the parking lot. He was never without Trident gum to share with everyone. Many times he would be extremely late for dinner because he would double as a taxi to take those players home who didn't have a ride. His love of sports and kids would continue until the end.
Christmas was Nick's favorite holiday and he found the best way to celebrate and enjoy it; he would transform into Santa each year and make the holiday magical for multiple generations. He spent the entire year preparing to make Christmas memorable for as many kids as he could. He went so far as to write their names on a list with their age and Christmas present wish. He crinkled the paper and burnt the edges to authenticate the look. Nick would be able to witness the magic as each one would find their name. He would research the kids and find out what they were into and how they were doing at home or school to really personalize the visits. Many adults would later tell him that those were the best visits and really made them believe in Santa and the spirit of the holiday.
Over the years the "Nick Alaga" pancakes would become famous. The morning after any of his kids would have a sleepover their guests would awake to a pancake feast. Some of the best talks and most laughter would happen sitting around the table eating those pancakes.
Nick was very proud of his heritage and traditions. The most notable traditions were centered on Christmas. One of those was raising pigs for the holiday; he and his cousins would continue the tradition that their parents started. Since Nick was the Alaga with a ranch the pigs would be raised at his home. The day they were to prepare the pigs the entire family would arrive at the crack of dawn and spend day together. On Christmas morning the Alaga's and other Croatians would embark on the favorite tradition of visiting family and friends. Nick and his children would go from house to house to have a shot of Slivovitz and visit. Over the years the group would expand to include his kid's friends and later his grandchildren.
Nick leaves behind his beloved wife Pat, children Mark Alaga, Bob (Pam) Alaga and Katie (Mark) Heim, grandchildren Justin Bonita, A.J. (Ashley) Smith, Tyler Smith, Michael Alaga and Sera Alaga and great-grandchildren Elizabeth and Annabelle Smith as well as his sister Estelle Alaga.
Because of Nick's desire to pass on traditions and his heritage his family is requesting donations to the SACO (Slavic American Cultural Organization) Scholarship and Student Ambassadors Fund in his name.
A celebration of Nick's life will be held September 15th at his home. Further details will follow as the date nears.
Zivio dad, we love you!

To send flowers to the family in memory of Nicholas Alaga, please visit our flower store.