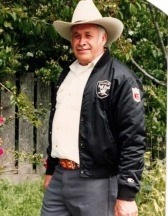 On January 25, Nicolas Silva peacefully passed away at the age of 80.

Mr. Silva, born on October 26, 1940, was a resident of Watsonville, where he lived for more than 40 years.  He enjoyed pan dulce, Starbucks, and watching Antonio Aguilar movies.

A visitation service for Mr. Silva’s family and friends will be held on Thursday, February 11th  from 5:00-9:00pm at Ave Maria Memorial Chapel in Watsonville.  A funeral mass will be celebrated at Valley Catholic Church the following morning on February 12th at 10:00AM with the burial to follow at Valley Public Cemetery, Watsonville.

To send flowers to the family in memory of Nicolas Silva, please visit our flower store.