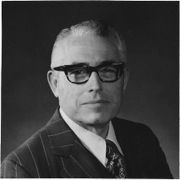 Richard Langan Walker passed away peacefully on August 19, 2017 surrounded by his family. Richard was born in Pasadena, California in 1918 and was the eldest of six children of Frank and Miriam Walker. Richard spent his youth in Southern California and attended the California Institute of Technology where he received a degree in mechanical engineering. Richard served in the United States Army Air Corps Intelligence as a Captain during World War II.

He married Marjorie Crehan in 1945. After his service was completed they moved to Cambridge, Massachusetts where he attended and graduated from Harvard Business School with a Master's in Business Administration. Richard and Marjorie returned to California where he began a career at Bechtel Corporation. He retired after over 30 years as a Vice President of business development on international projects. His assignments took him to Canada, the Middle East, Africa and Eastern Europe. Richard and Marjorie retired to Carmel where she passed away in 1982. Richard was very faithful as shown by his involvement in the Carmel Mission community. He was passionate about his family and loved researching the Walker family genealogy.

In 1986, Richard married Francie Flowers. They lived in Carmel until she passed away in 1994. Richard enjoyed his life in Carmel and often said, "It is Another Beautiful Carmel Day (ABCD)".

The family would like to express their thanks and appreciation to friends and especially those who cared for him at Wesley House, Hospice of Santa Cruz County and Dr. Christopher O'Grady.

A memorial mass will be celebrated on Monday, September 11th at 10:00 AM in the Carmel Mission Basilica.

Funeral Arrangements have been entrusted in the care of the Carroll Family of Ave Maria Memorial Chapel, www.avemariamemorialchapel.com .

To send flowers to the family in memory of Richard Walker, please visit our flower store.