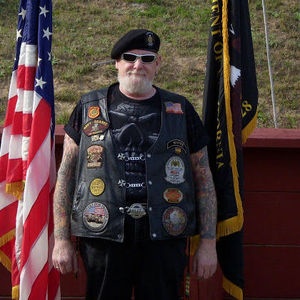 On July 29, 2015 we said goodbye to Robert "Wayne" Cloukey . Born November 6, 1946 in Athol Massachusetts. He graduated from Samuel Ayer High School in Fremont CA where he wrestled and played football before joining the service.
Wayne was very proud to serve his country in the US Navy as a Seabee. He did two tours in Vietnam where he was known as "Red".
After his time in the service he went to work for Lockheed Martin where he started as a janitor and worked his way up to maintenance manager. While at Lockheed he acted as a shop steward. After 37 years he retired.
He lived life to the fullest and enjoyed a special relationship with his father. They enjoyed many adventures once as a cowboy on the family ranch. Then they built a commercial fishing boat from scratch (fishing it for years) and racing cars at Watsonville Speedway.
He was past president to the American Legion Riders District 28. The first Area 2 Vice President and Assistant Commissioner for the Legion Riders State of California. He was a lifetime member of the American Legion, and Past Commander of American Legion Post 593.
Wayne enjoyed football (Oakland Raiders), Nascar, and riding his Harley Davidson with friends. He seemed to know someone everywhere he went. He rode many places but multiple times to Sturgis and participated in the ride to the wall (Rolling Thunder) were he paid tribute to the fallen soldiers.
The Man, The Legend, The Friend to All. He will be deeply missed.
He was preceded in death by his father Leonard Cloukey, his mother Monica Cloukey and sister Gail Corona . Survived by his partner and best friend in life Koni Dearman, and her son Dustin Dearman. His Niece Tracy Scott (Jason Scott) grand-nephews Nathan and Jacob Scott. And numerous friends.
A celebration of life will be held August 29, 2015 at American Legion Post 593, 8300 Prunedale North Rd. Prunedale CA 93907 at 1pm.
Please make your donations to Monterey County Vietnam Veterans Memorial, PO Box 547, Salinas CA 93902. In memory of Wayne Cloukey.

To send flowers to the family in memory of Robert Cloukey, please visit our flower store.