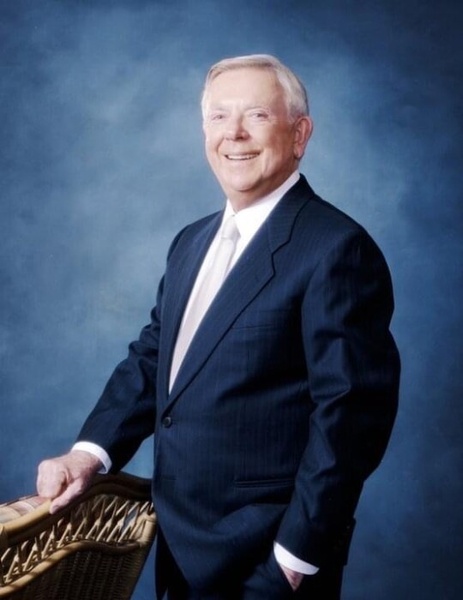 Robert E. Hall, Jr. (Bob) of San Jose, CA passed away peacefully on the evening of Thursday, June 4, 2020.  Bob was born on April 28, 1936, to Robert and Alvina Hall in Sioux City, IA, the oldest of two sons.  The family resided in Madison, SD.  Bob graduated from the University of South Dakota in 1958 and later went on to earn his MBA from Santa Clara University.

Bob started his career in banking, moving to San Francisco in 1964 to join Crocker National Bank.  In the early 1970’s he transitioned into real estate, founding Almaden Oaks Realtors in South San Jose and building a successful business as a top broker in Silicon Valley over several decades. He also developed the Almaden Valley Professional Center at 6501 Crown Blvd and invested in real estate throughout the South Bay.

Bob was very involved in his community of Almaden Valley.  He was an active member of the Almaden Golf & Country Club and also sponsored various youth sports teams in the area.  In addition, Bob taught real estate finance and business courses at the Santa Clara University Graduate School of Business and numerous other local colleges.

As an avid sports fan, Bob enjoyed attending 49ers, Stanford football, Giants and A’s games with his children and friends.  He also cherished spending time with his family at their summer home in Rubicon Bay on the West Shore of Lake Tahoe.  Many special memories were created there with his children.

Bob is survived by his three children, Robert E. Hall, III of San Francisco, Susie Hall Sawyer (Adrian) of Tiburon and Carrie Hall Cooper (Chip) of Larkspur, and three grandchildren, Riley, Drew and Kate.  He is also survived by Marna Hall of San Rafael and De Phan of San Jose.  Bob is preceded in death by his parents and brother John J. Hall of McLean, VA.

A private funeral Mass will be held for Bob on Tuesday, June 16, 2020 at St. Anthony Catholic Church in San Jose.  Burial to follow at Gate of Heaven Catholic Cemetery in Los Altos.

The family requests that in lieu of flowers, memorial contributions may be made to Catholic Charities of Santa Clara County (catholiccharitiesscc.org) in Bob's name.

To send flowers to the family in memory of Robert Hall Jr., please visit our flower store.