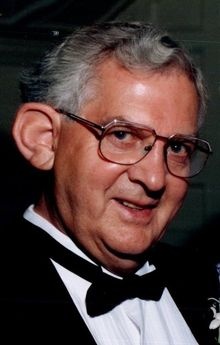 Robert Nelton Hanson, former Dean of the Business School at Northern Michigan University, passed away on September 7, 2017. Robert was born on October 30, 1930 in Tyro township, Yellow Medicine County, Minnesota, to Henry N. and Pearl (Davidson) Hanson. He was baptized and confirmed at Israel Lutheran Church. After attending country school at Yellow Medicine County District #29, he began attending the Clarkfield Public Schools in the fifth grade and graduated from Clarkfield High School in 1948. He served in the U.S. Marine Corps during the Korean War and in the Marine Reserves until 1960. For his service, he was awarded the National Defense Service Medal, Korean Service Medal, and the United Nations Service Medal.
Robert was married to Eunice Audrey Grabow of Renville on August 18, 1956. Two children were born to this union, Kay Adel and Barton John. Eunice died on January 24, 1993. Robert and Marilyn Hanson Gossler of Clarkfield were married on July 2, 1994.
Associate and Bachelor of Science degrees were conferred on Robert at St. Cloud State College in 1951 and 1956. He later received his Master of Arts degree from Colorado State College in 1960 and Doctor of Education degree from the University of North Dakota in 1966. His career in education was quite unique. After teaching at the elementary, junior high, and senior high school levels, he was a high school principal in Clara City, Minnesota. He later taught in associate degree, bachelor's degree, master's degree, and doctoral programs at several universities. He was Head of the Business Education Department from 1969 to 1977 and Dean of the School of Business from 1977 to 1984 at Northern Michigan University. Robert resumed full time teaching after resigning as Dean and taught until his retirement in 1991. Robert served on the Board of Directors of the Marquette Red Cross, United Way, Greater Marquette Area Chamber of Commerce, and as a member of the Economic Club of Marquette. He also served many years on the Church Council at Messiah Lutheran Church. A nationally known and respected business educator, Bob was the author of research publications and many professional journal articles. He also was a co-author of over twenty textbooks in the fields of typewriting and computer document processing. He received many academic honors, including Distinguished Faculty Award from the Michigan Association of Governing Boards of State Universities in 1989.
Robert is survived by his wife Marilyn, his daughter Kay and husband Jeffrey Kammen of Victoria, Minnesota, his son Bart and his wife Kirsten of Chicago, and his step-daughter Kimberly and husband Richard Opie of Watsonville, California. He is also survived by many grandchildren and great-grandchildren: granddaughter Sara (Kammen) Hoff, husband Chris Hoff, and their three children Julian, Josephine, and Theodore; granddaughter Jaime (Kammen) Macias, husband Luis Macias, and their daughter Sofia; granddaughter Grace and Grandson Peter Hanson; step-grandson Erik Jones; step-granddaughter Shelby (Opie) Alford, husband Nick, and their three children Maddie, Jackson, and Jacob. He is also survived by two sisters, DeLaine and husband John Moriarty of Avon, Minnesota, and Patricia Hutchinson of Pine Grove, California. He is also survived by several other sisters-in-law and brothers-in-law as well as many beloved nieces and nephews. Robert was preceded in death by his parents, his wife Eunice, his sisters Doris and Barbara, and brothers Ralph, Glenn, Duane, and Hank.
After moving back to his hometown of Clarkfield upon marrying Marilyn in 1994, Bob was a member of Clarkfield Lutheran Church, American Legion Post 169, the Clarkfield Lions Club, and several professional organizations. After moving to Clarkfield, he continued his textbook writing and devoted many hours as a volunteer in the community, particularly those which involved senior citizens.
In 2003, Robert and Marilyn moved to Mesa, Arizona year-round, where they enjoyed a retirement of tennis, golf and many close friendships in their community of "Leisure World." They enjoyed seeing the world as well, travelling to China, Australia, New Zealand, Fiji (where they played tennis!), Greece, France, England, Scandinavia, Spain, Morocco, Israel, and cruising to Alaska and the Caribbean (including the Panama Canal and Colombia). Bob was a sweet, funny man with an easy laugh and a kind smile. He will be missed.
Memorials may be made to Hospice of Santa Cruz County or Clarkfield Lutheran Church.

To send flowers to the family in memory of Robert Hanson, please visit our flower store.