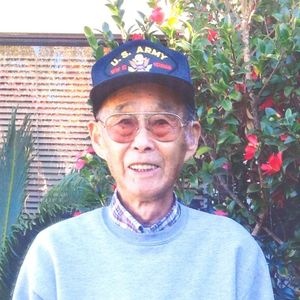 Robert K. Yamamoto, passed away peacefully at his home surrounded by family on May 6, 2014. Bob was born and raised in Watsonville and was blessed to have lived 90 years.

During World War II, Bob was interned in Poston Camp II with his family and then served in the U.S. Army with the Military Intelligence Service and the 441st Central Intelligence Corps detachment in Japan. He attained the rank of Sergeant First Class (SFC), taking great pride in serving his country. Following his military career, he farmed strawberries with his father and brother for almost 10 years and then pursued a landscape gardening business for over 50 years until his retirement in October of 2013. Bob was a member of Westview Presbyterian Church, Watsonville JACL, and life member of the Monterey Nisei VFW post 1629. His hobbies throughout the years included bowling, fishing and golf as well as spending time with his grandchildren and great-grandchildren. Bob was a good man with a sense of humor and a big smile for everyone.

Arrangements were entrusted to the Carroll Family of Ave Maria Memorial Chapel. A military burial ceremony was held at Pajaro Valley Memorial Park followed by a private memorial service at Westview Presbyterian Church on May 16, 2014.

In lieu of flowers, contributions can be made in Bob's memory to Westview Presbyterian Church, P.O.Box 2025, Watsonville, California 95076, or Hospice of Santa Cruz County, 940 Disc Drive, Scotts Valley, California 95066.

To send flowers to the family in memory of Robert Yamamoto, please visit our flower store.