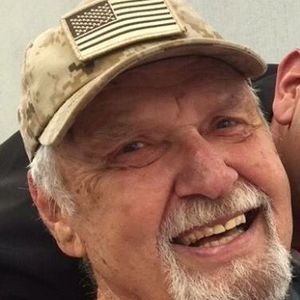 On Wednesday, January 25, 2017 Ronald Peter Blevins peacefully passed away surrounded by his family in Royal Oaks. He was 80
Ron was married to his loving wife Virigina for 53 years. He was an avid photographer and enjoyed model trains and guns. He loved camping, fishing, and exploring the back roads of the Sierra Nevada with his family in tow. Ron especially enjoyed exploring ghost towns and locations that were rumored to be haunted, he was always on the watch for ghostly apparitions. Ron loved early morning drives with his dog, it was his favorite time of the day. Ron was also a veteran of the U.S. Army during the Cuban Missile crisis and was stationed in Germany, but most of all Ron loved to spend time with his family. We will miss him dearly, beloved husband, father, grandfather and great grandfather.
He was preceded in death by his parents; Amelia Hinck and Warren Blevins.
Ron is survived by his wife, Virginia Olmeda Blevins and his children; Julie Blevins (Felipe) Guillen and Christopher (Marta) Blevins. He is also survived by his siblings; Cece Barber and Susan Armetta and his grandchildren; Elena, Alexandria, Katiana Guillen, Juliana, Peter, Kaitlyn Blevins, Christian and Richard Cortes and great grandchildren, Irie and Bradley.
A graveside service will be held on Friday, February 17, 2017 at 11 AM at the Veterans Cemetery at Fort Ord.

To send flowers to the family in memory of Ronald Blevins, please visit our flower store.