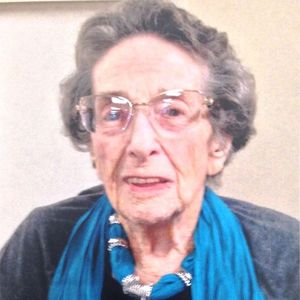 Ruby Mae Handley Franzke, age 99, was residing in Gladstone, Oregon at the time of her death on March 28, 2017. She was born in Tracy, California on January 8, 1918, the first of two children born to Nettie Jane Garlick and Alexander Handley. Her brother, Grover, was born when Ruby was a teenager.
Ruby graduated from Salinas High School and then moved with her family to Soquel, California where her father found work as a butcher. It was there she met and eventually married Oscar John Franzke on July 25, 1937.
The Franzke first settled in Santa Cruz, California where three children were born to them: Ronald Oscar, Donna Mae and Darlene Faye. Ruby became an excellent seamstress, sewing clothes for her growing family and herself. She also took up crocheting which she found so enjoyable that it became a lifelong passion. She and her husband and son began Bible studies and, in 1949 were baptized and joined the Soquel Seventh-Day Adventist Church where she taught the children Sabbath School classes for many years.
Desiring more room in which to raise their family, they moved onto a beautiful three acre apple ranch in Watsonville, CA. Ruby was always devoted to her family and was a wonderful homemaker. Ruby soon became known for her delicious pie baking talents which she performed by baking a pie every day for her family and visiting friends to enjoy.
Ruby and Oscar enjoyed camping, fishing and traveling. One of the highlights of her life was a trip to Israel, Jordan and Egypt, which initiated a serious lifelong interest in biblical archaeology.
Ruby was pre-deceased by her grandson, Christopher Regan, her husband, Oscar Franzke, her brother Grover (Gene) Handley, and her two daughters, Donna Peterson and Darlene Franzke.
Ruby is survived by her son, Dr. Ronald Franzke (Nancy) of West Linn, Or,; her grandchildren; David Franzke (Kathleen), Douglas Franzke (Kimberly), Jenifer Alfaro (Jose), Peter Franzke, Suzanne Hervig (Richard) and Stephanie Kendall (Anthony Bell). She is also survived by her sister-in-law, Coral Fisher, twelve great-grandchildren and numerous nieces and nephews.
Her memorial service is under the direction of Ave Maria Memorial Chapel and will be held on Thursday, April 13, 2017 at 10:30 AM at the Pajaro Valley Memorial Park, located at 127 Hecker Pass Road, Watsonville, CA. For further information please call 831-724-4751.