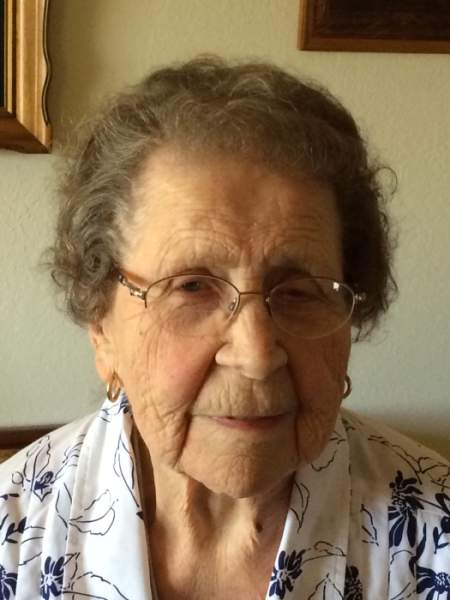 Shortly after her ninety-ninth birthday, Ruth G. Hardy passed away. She came into the world on August 14, 1919, and departed it on September 12, 2018.

Ruth was born on the Frost family farm in Harvey, North Dakota. She completed grade school in a single roomed schoolhouse at the age of sixteen, but was required to wait two years before attending nursing school. She earned her degree from St. Luke’s Nursing School in Spokane, Washington, and an advanced degree in public health from Oregon Medical School. As an RN, Ruth was quick to serve her country during WWII, distinguishing herself as a 2nd Lieutenant in the United States Army Nursing Corp.

The war ended and, while living with her parents in Portland, Oregon, Ruth met Wayne H. Hardy. Ruth and Wayne were married for sixty-six years and raised two children, Lauren and Susan. Wayne’s work took them to Texas, North Dakota, Oklahoma, and Arizona; in 1964, the family settled in Watsonville, California.

Ruth brought her skills as a nurse to Watsonville, worked in the public health system, and helped to establish its prenatal clinic. She also served as president of her local chapter of the California Retired Public Employees Union. As a devoted member of the Watsonville United Methodist Church, she gave generously to its inner life.

She enjoyed handcrafts, knitting, and crocheting, and was well known for her talents as a baker and cook. During retirement, Ruth and Wayne traveled extensively throughout the United States in their motor home; they loved traveling together.

Ruth is to be interned at Pajaro Valley Cemetery, and a private celebration of her life will be held at the family home in Watsonville. She will be remembered for her generosity, her kindness, and her unbounded energy and devotion.

To send flowers to the family in memory of Ruth Hardy, please visit our flower store.