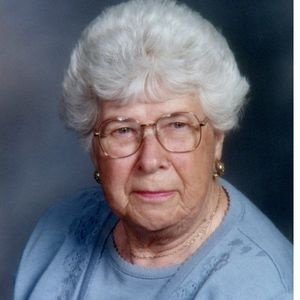 On December 5, 2016 Ruth Hutton quietly slipped from this life to the next, at home in her bed as she wished. Ruth was born and raised in Watsonville, and with the exception of a couple of newlywed years in Pajaro, lived her entire life on the land on which she was born. A life long member of the First Baptist Church of Watsonville, she was active in the church until her health prevented it.
Ruth Ellen Thayer married James Hutton, a neighbor boy and Watsonville native, and they were together for 74 years until his death 10 years ago. Ruth lived her life by the Golden Rule "Do unto others as you would have them do unto you" and was a quiet inspiration to all who knew her. She is survived by her daughter Gerrie Brooke, son-in-law Sam Brooke of Watsonville, son Gary Hutton of San Francisco, and grandson Steven Beck of Corpus Christi Texas.
In lieu of flowers, donations to Hospice of Santa Cruz County or the First Baptist Church of Watsonville in her name would be appreciated. A memorial service will be held at the Frist Baptist Church in Watsonville on Dec. 13 at 1:00 pm

To send flowers to the family in memory of Ruth Hutton, please visit our flower store.