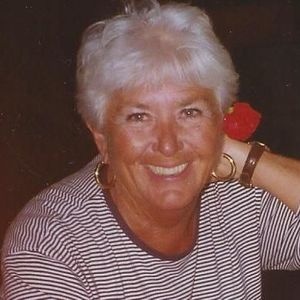 Sharon Mary Culbertson passed away peacefully at home in Aptos on December 12th, 2014 at the age of 78. Sharon was born on October 7th, 1936 to Jack and Mary Johnson Lipscomb in Detroit Michigan. She spent her childhood growing up in Royal Oak Michigan and graduated from Shrine High School in 1954. She received a Bachelors' Degree in business from "The University of Detroit" in 1956, after which she moved to California.

Sharon married Donald Holmes in 1959 and during their 10 year marriage created a family of four sons: Mark, Chris, Mike, and Greg. Sharon later moved to Aptos, California and married Robert (Bob) Culbertson in December of 1979 and gained a whole new family of three girls: Joan, Janet, and Joyce. Bob and Sharon built a wonderful life in Watsonville for the next 33 years until Bob's passing in November of 2012.

Love of her family was the main guiding force in Sharon's life along with spending her time volunteering for both the Watsonville Community Hospital and the Watsonville Woman's Club. Sharon's passions in life were family, cooking, charitable work, attending her grandchildren's sporting events, tailgating at Cal Bear football games, Jazzercise, lying in the sun, traveling to all continents of the world, and reading.

Everyone who knew Sharon will miss this wonderful woman. She is survived by her siblings John (Janet) Lipscomb, Pat (Mary Lou) Lipscomb and her children Mark Holmes (Rene), Mike Holmes (Kim), Greg Holmes, Joan Frey (John), Jan Culbertson-Dickey (Larry), Joyce Parr (Dino), and her 13 grandchildren and 3 great grandchildren. She is predeceased by her parents, Jack, Mary and Virginia Lipscomb and her son Chris Holmes.

Instead of flowers, the family request donations to be made in Sharon's name to Hospice of Santa Cruz.

Our thanks go to Stanford Hospital, Dominican Cancer center, Quality Home Care of Santa Cruz, Hospice of Santa Cruz, Dr. Andrea Edwards, Ave Maria Memorial Chapel, and to the numerous wonderful friends and family that helped make the end of her life as comfortable and great as it was.

To send flowers to the family in memory of Sharon Culbertson, please visit our flower store.