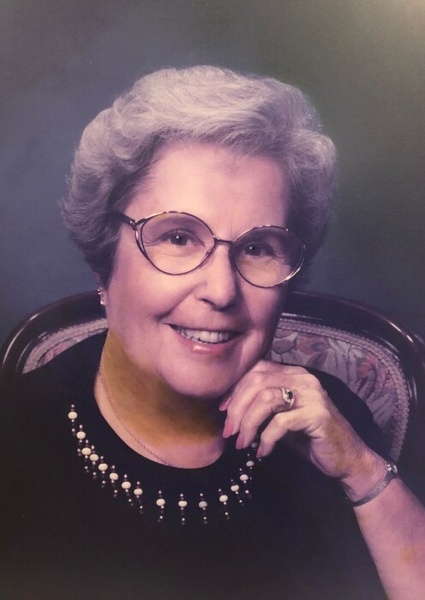 Shirley Leona Capurro was born in San Francisco, California on May 6, 1924 to Frank and Leona Capurro. She was raised on the family ranch in Moss Landing, California. She attended Springfield Grammar School and Salinas High School, where she graduated in 1941. Shirley went on to attend Lone Mountain College in San Francisco and graduated from San Jose State with a degree in History and English.

Shirley returned home and married Robert (Bob) Manfre of Medford, MA in 1949.  They were happily married until his death on Easter Sunday in 1994, 45 years later. She remembered him with great love and missed him dearly until her own passing.

Shirley and Bob raised 3 sons (Mike, John, Gary) and a daughter (Denise) on Anderson Drive in Watsonville. In 1963, the family moved to East Beach Street and lived there for 14 years. This home eventually became the YWCA. In 1977, Shirley and Bob moved to Pajaro Dunes and spent many happy years there celebrating Christmas Eve, 4th of July and 49er Sundays with their children and grandchildren.

Throughout the 90’s and 2000’s, Shirley split time between the Monterey Bay and Palm Desert, golfing and spending time with friends who were trying to meet “men who could drive at night.”

She happily spent her later years at the Valley Heights Senior Community where she was an active resident.  She was involved in several card-playing groups, practiced Tai Chi and loved participating in all the social activities on offer.

Shirley was a bit of a card shark and loved Pedro, Bridge and Gin Rummy. She may or may not have cheated to win when teaching her great-grandchildren how to play Gin Rummy one Christmas Day. In her quiet time, she would work on the puzzles that were always in progress in her home.

A die hard San Francisco sports fan, Shirley was a 49er and Giants season ticket holder for decades and traveled to support her team in Super Bowls XVI & XXIII.  She was at Candlestick Park watching the Giants in the World Series during the 1989 Loma Prieta earthquake.

She was an avid golfer and a stickler for the rules of the game. She was a 65 year member of the Pajaro Valley Women’s Golf Club, a Member of Salinas Golf and Country Club and a Member of PGA West in La Quinta, California. She golfed until she was 85 years old and would hit it straight down the fairway 30 yards at a time.

Shirley and Bob traveled extensively in their 50’s and 60’s. Together they walked on the Great Wall of China, went on a Jeep safari in Nairobi and saw a midnight fashion show in London. After Bob’s passing she took “the girls” in the family on cruises throughout the US, Russia and Canada.

As part of their travels, Shirley and Bob visited The Alisal Guest Ranch and Resort in Solvang, CA in the 1950’s.  This eventually became a family tradition that endured for more than 25 years, with more than 30 family members in attendance as the family grew.

Shirley is proceeded in death by her parents, Frank and Leona Capurro, her beloved husband Robert Manfre and her brother Bud Capurro and his wife Betty.

She is survived by her children Michael (Kimarie), John (Mary), Gary (Kristi) and Denise (Ken Leach). Shirley and Bob were blessed with 8 grandchildren and 18 great grandchildren. She is also survived by her sisters-in-law, the “Aunties” Beverley, Geraldine, Donna and Teresa as well as numerous nieces, nephews and godchildren.

Shirley will be remembered for her zest for life, her deep love for the color lavender and the “whiskey bass” she would gladly show off whenever she found an empty stage.

Shirley passed peacefully, surrounded by family, on Sunday, January 17th at the age of 96.

A private, family service has been held, a Celebration of Life will be held at a later date.

Donations in her name can be sent to the local Red Cross, Moreland Notre Dame School or a charity of your choice.

To send flowers to the family in memory of Shirley Manfre, please visit our flower store.