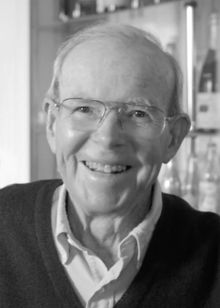 Stephen C. Martinelli, the former President of S. Martinelli & Co, died peacefully at home at the ripe old age of 87 on November 28th, surrounded by his loving family.

He represented the third generation of the award-winning apple juice and sparkling cider company that was founded by his grandfather, Stephen G. Martinelli in 1868. He joined the family owned and operated business as an Assistant Manager in 1955. During his 58 years at Martinelli's, Stephen achieved many noteworthy accomplishments and became head of the company when his father passed away in 1962.

Stephen led the company through a growth period that stressed the family resources trying to keep up with the demand for their gold medal juice products. In the process, Stephen developed strong personal relationships with our local growers with handshake agreements to grow the most flavorful tree-ripened apples in the Pajaro Valley. He employed his artistic skills, developed during the radio era of his childhood, designing labels and packaging by hand including the Old Timer Hard Cider label, a family favorite from the 1960s and 70s.

Prior to joining Martinelli's, he graduated from his beloved CAL with a degree in Business Administration. He loved to tell people he played in the Rose Bowl during three of his four years at CAL... as a clarinet player in the marching band! He then served three years as an Air Intelligence Naval Officer, working side by side with future astronauts Wally Schirra and James Lovell.

Stephen was a gentle, generous, humble and sometimes solitary man. He enjoyed fishing, snow skiing and especially tennis with his family and close friends. He was an avid reader and loved to clip important articles from the Wall Street Journal that were helpful in guiding his business management strategies. Stephen loved being a sports fan, enduring the down years of his beloved San Francisco Giants and 49ers, while celebrating their eventual successes. He had a great sense of humor that was passed onto his kids and grandkids.

A private celebration of life will be held after the first of the year.

The family asks that memorial gifts be made to Jacob's Heart headquartered at 680 West Beach street, Watsonville, CA 95076.