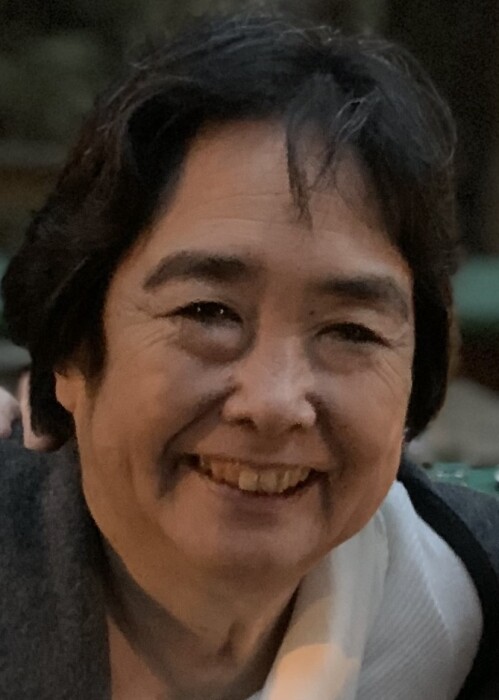 Susan Kim AmRhein went to her eternal rest on December 4th, 2021, due to complications from a massive heart attack.

Born on September 25, 1956, in Gilroy, California, Susan was the only child of Namio Ohara and Helen (Miyasaka) Ohara, but she lost her father at a very early age. Susan and her mother then moved to Japan and lived there for several years where Helen met and married Takuya Nakano. The family then returned to California where Susan would live out the rest of her life in Watsonville.

Susan attended Watsonville High School where she played the flute in the Watsonville High School band and was fortunate to tour Europe with the school’s honor band. After attending San Jose State, she returned to Watsonville to work in the family’s restaurant and farm supply businesses. While working at Watsonville Farm Supply, she met Thomas AmRhein, a young, up and coming strawberry farmer who she would later marry in 1988.

Her three children, Ricardo, Aaron, and Yuan were the center of Susan’s life. To complete the adoption of her children, one from Mexico, one from China, and one in the United States, Susan relentlessly battled inefficient, corrupt bureaucracies and absurd regulations. Through all this, she maintained her good sense of humor about cultural and racial mix within the family. Her license plate, MINIUN, stood for “Mini – United Nations”. Probably one of her proudest achievements was the homeschooling of all three kids through their high school years in conjunction with Pacific Coast Charter School. It was a daunting task that even she would say was not a right decision for every family, but it was the right one for her kids. Susan had a wide circle of friends in Mexico, including Luis Serrano, a young agriculture student from Obregon who lived and worked with the family for a number of years. The family lovingly referred to him as Susan’s “4th child”.

Susan was a trained chef from the California Culinary Academy in Monterey. She was known far and wide for her cooking skills and kept everyone well fed. The family’s Oktoberfest and Shogatsu (Japanese New Year’s celebration) were culinary and cultural wonders.

Susan was always very giving of her time. Over the years, she was a Court Appointed Child Advocate, she tirelessly volunteered at the Watsonville Japanese American Citizens League Senior Center, was an active member of Soroptimist, a volunteer at the Watsonville Public Library, and supported numerous church activities.

Susan was a woman of deep faith who strove to live her adopted Catholic faith every day. After hearing a typical sermon on having to “pray constantly” she would worry all the way home from Mass about how God could require her to do that and still expect her to make Sunday dinner.

Despite all Susan’s activities and energy, few knew the serious health challenges she endured during her adult life, but she never complained despite the great effort it took for her to move ahead each day. Susan’s passing from a heart attack was a complete shock to both family and friends. She also didn’t allow COVID and the looming pandemic stop her from living her life. Just this past year, Susan and Tom had some very wonderful adventures together, including a trip to see Tom’s family in Indiana, the wedding of the son of close friends in Guadalajara, and most recently for her birthday, a cross country trip on AMTRAK train in a private room. In that case, though, it came to light that she enjoyed the first class return flight home more than the 26-hour train ride!

The family wishes to thank the hundreds of people who prayed for Susan in her last days. We would also like to thank the first responders from the Casserly Fire Station that came to the house, the doctors who tried everything to save her, and the amazing ICU staff at the Dominican Hospital.

The Funeral Mass followed by burial will be held on Thursday, December 16, 2021, at 10:00am at Our Lady Help Christians Church located at 2401 East Lake Ave. in Watsonville.

In lieu of flowers, please consider a donation to the organization of your choice.