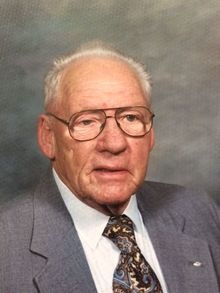 Wayne Harold Hardy passed away peacefully on February 21, 2015 at his home with his wife and daughter at his bedside.
Wayne was born on March 28, 1921 at Vancouver, Washington. He graduated from Vancouver High School and, at the age of twenty-one, enlisted in the Army. During WWII Wayne served in France, Italy and German. After the war, he returned to Portland and found the love of his life, Ruth. They were married on Christmas day in 1948 and started their life together in Medford, Oregon. Their two children, Lauren and Susan, were also born in Medford. Wayne was a professional salesman who sold farm equipment until he moved with his family to Watsonville in 1963. He managed a travel trailer sales lot for Schiavon's in Salinas until he became co-owner for A & H Trailer Service and Supply on Freedom Blvd. in Watsonville. Upon retirement, Wayne and Ruth traveled around the United States in their motorhome and enjoyed fishing at Eagle Lake in Northern California.
Wayne is survived by Ruth, his wife of 66 years; his brother, Dean Hardy, of Seattle, Washington; his children Lauren Hardy (Lita) and Sue Foreman (Bill). He has two grandchildren, Matthew and Gary Mitchell, and two step-grandchildren, Sara and Heather. He also has one great-grandchild, Liam Mitchell, and a niece and two nephews from Seattle.
Wayne will be remembered by friends and family as a man who loved life and lived generously. He was a master storyteller.
Interment will be private. There will be a memorial service at the Watsonville First United Methodist Church on Saturday, February 28, 2015 at 11:00 am.

To send flowers to the family in memory of Wayne Hardy, please visit our flower store.