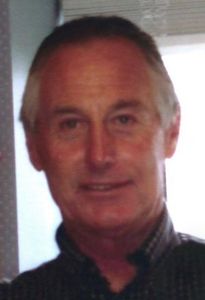 William "Bill" Henry Russell was born to parents Dr. James Leroy Russell and Patricia Leas Russell in Woodland, CA on May 19th, 1954. When Bill was two his father was offered a veterinary job in Watsonville, it was then that the family along with brothers Danny and Jimmy moved to the area. He attended local schools and went on to graduate from Watsonville High School in 1972.

Bill worked at Granite Rock for 30 years prior to his retirement. He was an avid dirt bike rider, loved riding horses, backpacking in Yosemite and skiing with family and friends. He most enjoyed camping with Karen, Billy and Leslie. For the last five years he had been the proud grandfather of Karlee.

Bill was diagnosed with Alzheimer's and he battled that illness for the last four years. On the morning of Saturday February 8th, surrounded and comforted by his wife and children, that same disease ended his life.

Bill is survived by his wife, children and brother Danny. Also, he leaves behind his granddaughter Karlee, along with nieces Allison (Taylor) Walter, Maggie Russell and Hannah Travers and nephews Eric Taylor, Kyle Travers and Collin Travers. There are also many extended family members sharing in this loss. Last he leaves behind his beloved pet; a black Labrador named "Puppy". He was preceded in death by his father Dr. Russell, his mother Pat Russell, and his brother Jimmy Russell.

Please join Bill's family and loved ones at a celebration of Bill's life on Friday February 21st, 4pm at the Padres Hall, 35 Browns Valley Rd in Corralitos, CA. In lieu of flowers, the family requests donations be made in Bill's name to Hospice of Santa Cruz, the Alzheimer's Association, or the Santa Cruz SPCA. We were lucky to have you in our lives Bill and will carry you in our hearts forever.

To send flowers to the family in memory of William Russell, please visit our flower store.