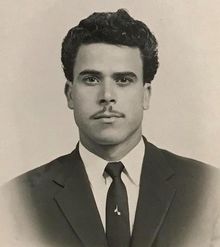 On January 28th Ygnacio Duran Avila passed away surrounded by his family in Capitola. He was 83.
Ygnacio was born in Chihuanua, Mexico and later moved to Watsonville. He was a dedicated family man that worked very hard. He worked at Clint Miller Farms for more than 40 years as a Heavy Equipment Operator. Above all he loved his family very much and cherished spending time with them.
He is survived by his wife, Rebeca; his daughters Leticia Mariscal, and Linda Duran; sons Martin Duran and Ignacio Duran; his brother Luis Duran; and numerous grandchildren and great grandchildren. He was preceded in death by his 3 sisters, Paulita, Manuela and Josefina; and his brother Margarito.
There will be a visitation service on Thursday, February 1, 2018 from 5:00 - 9:00 PM at Ave Maria Memorial Chapel in Watsonville with the recitation of the Rosary at 7:00 PM. The Mass will be held on Friday, February 2, 2018 at Holy Eucharist Catholic Church in Corralitos at 11:00 AM and the burial will take place directly after at Valley Public Cemetery in Watsonville.